Prague is known as the city that remained practically undamaged during the second world war. Nevertheless, was Prague bombed in 1945? Yes, it was. First bombs were dropped already in November 1944 but the main bombing happened in late winter and spring 1945. The tragic bombing that reshaped Prague´s center happened on the Valentine’s Day, 14th February 1945.

To put things into context: in 1945 the second world war is coming to an end, the allies are fighting on two fronts, Auschwitz is deliberated, Prague stays firm and so far undamaged. But for one big exception: bombing of February 14th 1945.

The results were tragic. Over the 9 minutes of the bombing 152 tons of bombs were dropped on broad Prague city center. 701 persons lost their lives, over 2500 houses were damaged out of which 68 were completely leveled down.

It was 62 airplanes of B-17 Flying Fortress of the USA AF flying to Dresden – but they ended up by mistake – bombing Prague.

Simply: navigation error. The planes where flying from basis in Great Britain. There was mist and fog over the Netherlands so when the planes reached central Germany some were off the course 120 kilometers. The pilots could orient themselves only by the watch, maps, train tracks, and by how the landscape looked like.

Unfortunately, they thought they were in Dresden but they ended up in Prague. In March and April 1945 other areas of Prague were bombed. But the targets were airports and important factories for Nazi arming.

So to answer the question: Was Prague bombed in 1945?

Yes, it was. Luckily, the main landmarks of city center stayed unharmed. Areas where the bombed were dropped was souwthward from the center, areas of New Town, Vinohrady, Smíchov, and others on the right side of the Vltava river.

Two buildings because symbols of the bombing. The first one was the largest synagogue in Prague located in Vinohrady area. The building remained but it was torn down by the Communists in 1951. The second building was the the monastery called Emauzy, founded by the King Charles IV in 1347. 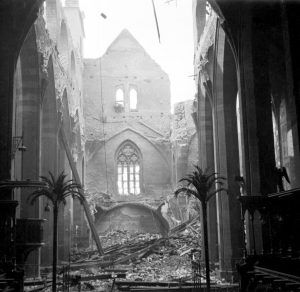 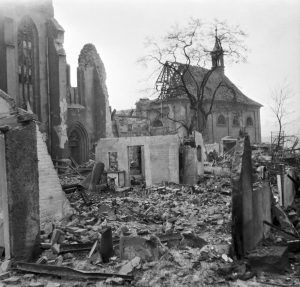 The monastery was damaged a lot. Only in 1968 the building got new façade, roof, and two towers. The design was done by an architect František Černý. The two modern towers became a symbol not only of the new monastery but also of the new modern architectural awakening in Communist Czechoslovakia of 1968, broadly known as the Prague Spring.

New facade and towers from 1968 by František Černý

If you are interested in the WWII and what was happening with Czechoslovakia and Prague, book a WWII and Communism tour with Supreme Prague and visit the places where all the major events of second world war happened.