I know the story: you came to Prague, had seen everything there, and now what. A trip out of Prague sounds good – but where to go, what to see? You are not so much into history, walking, and sightseeing. Maybe you came with your family or friends: you prefer an experience, fun activity together – all that is combined in the visit of Pilsen brewery. 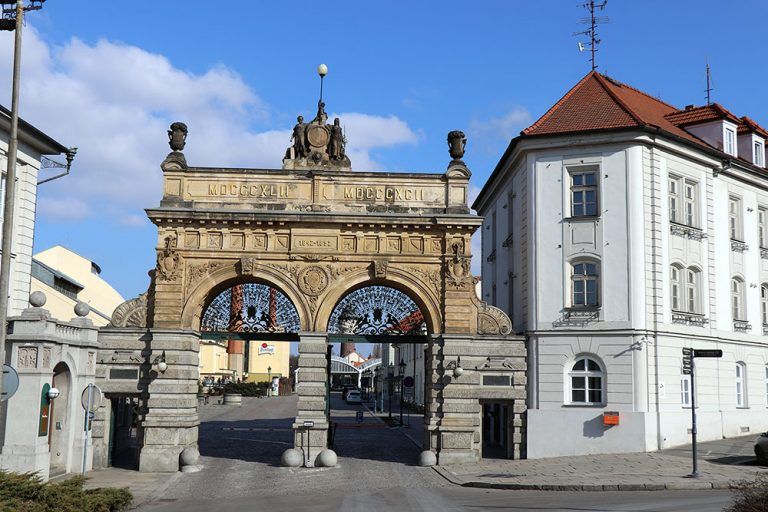 I have visited many museums, factory excursions, places to see. It has been a few months since I did the visit of Pilsen brewery and still I am so thrilled of what I had experienced. Not that I remember the details, numbers, years from the excursion but I remember how great it was and also…the last part…! The beer tasting in the cellars!! 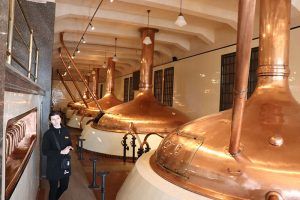 Check the availabilities of commented tours in your preferred language (English, German, Russian) before setting off from Prague, they could be only in afternoon (the drive takes about one hour). However, you may organize the tour for a large group privately outside the scheduled times (information here).

When all that is set and the tour has started, you board the bus to drive between the buildings in the brewery complex. You are taken to the different places:

Then you go to a brew house to see the tanks where beer is brewed. The Pilsen brewery has been investing a lot of money into technology, “you will also view a modern brew house from 2004, which will convince you that although the technology has been developing, the historic way of brewing Pilsner Urquell beer remains the same.” 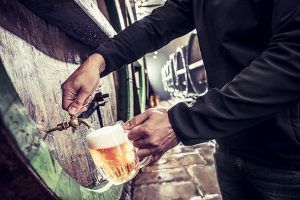 The last place to visit are the historical cellars. They are not used anymore to keep the beer there, only with the tour you can visit them. Only around 5°C is all year round there so do not forget to bring a sweater in summer. The cellars are below the brewery and going under the city of Pilsen, they are many kilometers long. In the winter ice blocks were cut from frozen ponds in the area of Pilsen and transported to cellars. The blocks were piled on top of each other in height of a house, they kept the temperature in cellars till next winter when new ice blocks were cut. You taste here the original unfiltered and unpasteurized Pilsner Urquell beer exactly like it was 1842.

After the tour you can buy souvenirs in the brewery shop or you can eat at the restaurant in the complex. I always say that the restaurants at breweries are the best. It is also applied for the restaurant Na Spilce. The brewery is located close to the city center – you can see the main square and nearby third largest synagogue in the world or visit the Patton Memorial Pilsen about liberation of the city and Czechoslovakia by Americans in 1945. The visit to Pilsen brewery is a great trip where you can learn all kinds of interesting things.

If you are planning the visit of Pilsen brewery, check out our offer or contact us directly. 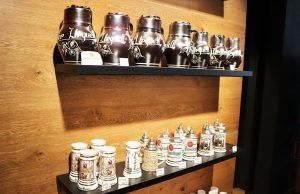 Souvenirs at the Pilsen brewery

What does mean Pilsner Urquell and what type of beer is brewed in Pilsen?

Pilsen is simply the name of the town Plzeň in German language. Pilsner is adjective – coming from Pilsen. Until 1918 or 1945 plenty of inhabitants of the city of Plzeň (in Czech region Bohemia) were Germans, including the founding fathers of the brewery. The first chief brewer, Josef Groll, was a German man from Bavaria.

Urquell in German literally means forsource, source/origin that existed at the beginning.

Pilsner Urquell beer is bottom-fermented lager with 4.4% alcohol content. This type was brewed in Pilsen for the first time in 1842 and from Pilsen it spread all over the world. So now you come to different countries where you order pils, or pilsner type beer which does not mean the beer was brewed in Pilsen but the brewing process does.

The secret of the great taste of the beer lies in the ingredients. “Its characteristic aroma of mated grains and balanced caramel flavor are the result of the triple mashing process; soft Pilsen water gives it its unique mild taste, while that velvety bitterness comes from Žatec hops. It is the malt itself that gives the beer its familiar golden colour.”